Why Christians Disagree About Doctrine 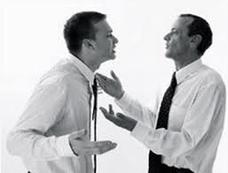 The Bible prescribes Christian unity. It warns us not to follow the teachings of men or devils but encourages us to remain in the doctrine once delivered to the saints. So why do Christians disagree about doctrine? Jesus said in John 16:13, “When he, the Spirit of truth, is come, he will guide you into ALL truth (emphasis mine), for he shall not speak of himself; but whatsoever he shall hear, that shall he speak: and he will shew you things to come.” How then can it be that Spirit-filled believers disagree?

Most Christians understand John 16:13 to mean that everyone who has the Spirit of God will be led into ALL truth by that Spirit. However, this interpretation presents us with a big problem: godly men will disagree about many passages of Scripture despite the fact that their faith and love for the Lord is sincere and they are indwelt by the Spirit. How can we reconcile their disagreement with what Jesus said?

The answer is simple. If we look at the words in their immediate context, we will notice that they were spoken to specific people in a specific context. Once we understand that, there will be no more contradictions. Let me explain…

In Chapter 13 in the Gospel of John, we find that Jesus spoke to his disciples during their last Passover meal. He was telling them that the Holy Spirit would come (which happened at Pentecost), that the Spirit would guide THEM into all truth (including truth yet to be revealed through the Apostle Paul), and that the Spirit would also show THEM things that would happen in the future (the final futuristic prophecy was given to John who wrote it down in the book of Revelation). In summary, Jesus’ statement predicted that the apostles would be led into all truth. They then recorded this truth in their writings, which would eventually form the Canon of Scripture.

2 Timothy 3:16-17 reminds us that “All SCRIPTURE is given by inspiration of God, and is profitable for doctrine, for reproof, for correction, for instruction in righteousness that the man of God may be perfect, thoroughly furnished unto all good works.” Once the Word of God was complete and compiled into one book, there was no more need for extra-curricular prophecies. This means that truth is located in the Word of God, not in the interpretation of God’s Word by men. Remember what Jesus said to the Pharisees who claimed to rightly interpret the Scripture of the Old Testament yet were sincerely wrong:
"Isaiah was right when he prophesied about you hypocrites; as it is written: These people honor me with their lips, but their hearts are far from me. They worship me in vain; their teachings are merely human rules. You have let go of the commands of God and are holding on to human traditions." (Mark 7:6-8)

If then Scripture is truth, yet we disagree on what it says, it must be our interpretation that is at fault. This leads us to the next question: how can we correctly interpret God’s Word? The answer, again, is surprisingly simple. We need to interpret it as we do any other literary text: understand the immediate context, the larger context within its chapter and the overall context within the Book. Often, the Bible will explain its own symbolism and parables. Historical knowledge helps us understand how idioms were used, and grammatical and textual contexts help us understand what the author meant to convey. Furthermore, our interpretations should not violate any foundational frameworks found in Scripture, but that is mostly where differences originate. Theological frameworks are built by those who define systematic theology, but not all systematic theology is entirely scriptural.

Let’s see how this works in everyday life. Many Christians admire educated peers and believe whatever they say, especially if they are well known and have written prominent books. If they teach truth, listening to them can be a good thing, just as it is biblical to submit to Christian leaders and the teaching of Church Elders. However, learned men (and women) are fallible, and the fact that theologians can and do disagree shows that we need to always verify their teaching from Scripture.

In light of having a Bible that claims to be the inspired and infallible Word of God, I was puzzled by theological disagreements until I began thinking about this issue in the context of church history and human behaviour. I began to realise that there are many factors that influence our current diversity of thought: cultural and philosophical trends, differing theological frameworks, resistance to change, preferences due to individual temperaments, and the list goes on. In the following I will discuss two of the more fundamental reasons: influences generated by theological frameworks and trends, and people’s resistance to change.

(1) Influences of Theological Frameworks and Trends
Apart from cultural and philosophical backgrounds, the founders of doctrinal distinctives were themselves influenced not only by theological thought already in existence during their lifetime, but also by the cultural trends of their time. Teaching schools arose and perpetuated current beliefs. Many of these schools, and later universities, taught the Word of God truthfully, yet others did not.
When students enter these colleges, they want to learn about God’s truth in order to serve him better, and their intentions are mostly sincere. The problem is not the students but the colleges. They represent denominational preferences and associated theological concepts and therefore embody particular mind-sets that they then pass on to others.
The students themselves are constrained by time and exam expectations and need to cram a lot of information in a relatively short period of time for the passing of tests. This means that they simply don’t have the time to properly research for themselves what is being learned, or even fully digest what they are being taught.
It is a fact that colleges tend to reproduce more of their own kind of academics with the same mind-set of ‘truth’. Students entering a chocolate-flavoured college, for example, will eventually pass on chocolate-flavoured doctrine. Those who enter a strawberry-flavoured college will pass on strawberry flavoured doctrine. If the doctrine is scriptural, all is well. But if it is not, then error flourishes. The end result is that individual flavours will be retained automatically within their cycle: a denominational college educates pastors and teachers… they then move to congregations… congregations bring in new converts… some of these eventually become new students… they are educated once again by the same college… and eventually move back into congregations…

(2) Resistance to Change
The second difficulty regarding disagreements stems from the fact that most people don’t like change. They prefer to stay within 'safe' parameters rather than chart new waters. They feel threatened by change, yet the path of Christian growth requires many changes: changed habits, changed thinking, and changed understanding due to increasing insights and learning. A growing Christian does not remain stagnant. However, most people are not free thinkers. They are part of the flock that follows their shepherd’s voice, and the shepherd represents a particular college flavour and church culture. Even among academics there are very few free thinkers, i.e. those who are able and willing to think outside of the square, and are willing to stand against the mainstream if their own research brings to light a different ‘truth’. Being eloquent and ‘studied’ does not necessarily mean that one has discernment and the agility to consider issues from new and different perspectives. This is also why commentaries make such interesting reading. When considering ‘difficult’ Bible passages, many commentators remain silent or else copy the thoughts of peers. Having said all of this, it is important to remember that those who unwittingly pass on erroneous information regarding a particular topic or teaching, are usually sincere in their motives! And moreover, they can be excellent teachers of truth in other areas. Yet in some instances they can also be wrong, albeit sincerely so.

You may have been wondering why I am writing about this issue. My point is this: every Christian, as far as he or she is capable, should search Scripture diligently to discern whether what they are being taught is true according to God’s Word. In this day and age, where almost all information is at our fingertips, this has become relatively easy (I might elaborate on available Bible study tools in a future post). Be assured that checking up on any teaching is NOT a contentious practice but one that was highly commended by the apostle Paul using the Bereans as an example (Acts 17:11). The Word of God is the sword of His Spirit and an essential component of our spiritual armour in pursuit of truth. There is only ONE truth, but the adversary would like us to think otherwise.

Be strong in the Lord, and in the power of His might! (Ephesians 6:10)